Click on the poster to see the enlarged version 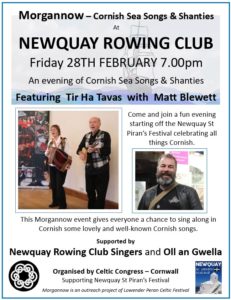 Morgannow will be an evening of singing by local singers from Newquay Rowing Club Singers and Oll an Gwella. Also encouraged by Tir Ha Tavas and Matt Blewett, YOU.

This is a fun event where everybody can join in singing to Cornish sea songs and shanties with all the words provided by the Morgannow team for you to read off the screen.

This should be a fun evening at the Travellers Rest, Trevarrian on Sunday 1st March. Once again it's good to see activities outside Newquay contributing to the Newquay St Piran's Festival.

Those supporting the Morgannow evening singalong at Newquay Rowing Club on Friday 28th should be able to join in with Oll an Gwella in bellowing out a few sea songs. 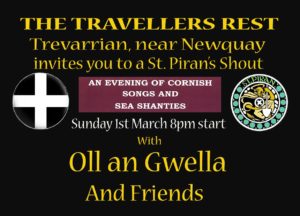 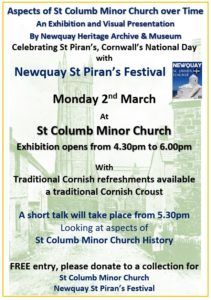 Newquay Old Cornwall Society through its museum will be putting on an exhibition at St Columb Minor Church from Monday 2nd March. There will be a St Piran's Cornish Croust with all the usual traditional Cornish refreshments from 4.20pm and a talk about aspects of St Columb Minor Church's history from 5.30pm to 6.00pm

All are welcome and we look forward to people from St Columb Minor and Newquay popping in and sharing this event with us.  We thank Rialton Community Group for their support and are pleased that a number of their members are also supporters and members of Newquay Old Cornwall Society.

Bait is a truly Cornish film, written, filmed and directed by Mark Jenkin and starring Ed Rowe, better known as Kernow King. By the time it had been on general release it was acclaimed overseas and had received numerous film festival awards, then BAFTA nominated in two categories. Writer/director Mark Jenkin and producers Kate Byers and Linn Waite received the award for Outstanding Debut by a British Writer, Director or Producer for Bait.

Prior to the BAFTA nominations the Newquay St Piran Festival Group had already agreed and planned to film Bait.

Come and see Bait, the ticket is FREE and available from the Lighthouse Cinema and Newquay Heritage Archive & Museum. We hope that you will contribute to the efforts of the Newquay St Piran Festival Group and buy a raffle ticket for £2.00 to support the Festival. 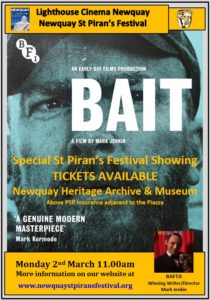 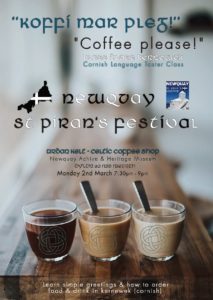 Urban Kelt - Gwerthji Koffi Keltek is situated in the Newquay Heritage Archive & Museum in the town centre. Here we have been able create an opportunity fusing together Cornish heritage with a delightful friendly coffee shop experience.

Learn some simple Cornish phrases so that you can order food and drink in Cornish along with some other useful day to day greetings and sentences.

The Newquay St Piran's Festival Concert takes place at St Michaels Church, where we can enjoy the wonderful acoustics of the performers.

This year we have the 'Cornwall Youth Chamber Choir', harp and violin duo 'Sea Strings' and the Newquay Male Voice Choir.

Entry is free, but we are sure that those attending will be encouraged to support the Newquay St Piran's Festival by popping a donation in the box at the end. 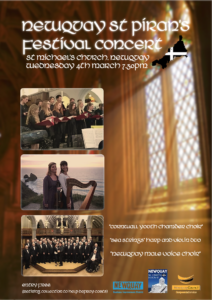 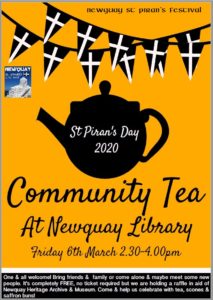 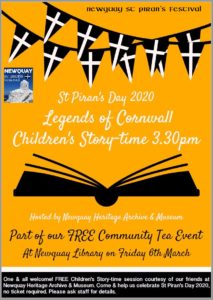 Newquay Library will be holding a Community Tea on 6th March as part of the Newquay St Piran's Festival. This starts at 2.30pm and at 3.30pm there will be a children's storytelling session until 4.00pm.

Stories will be about Cornish legends and there will also be a 'Cornish Legends' display throughout the Newquay St Piran's Festival in the Library. 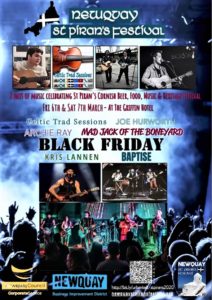 The Newquay St Piran's Gig is a great addition to the festival organised by UrbanKelt (official channel) in the Griffin basement venue from 7.00pm to 11.00pm. Some great contemporary music from well known bands.

Some FREE music events in the bar area and basement venue during the day along with loads of other Cornish activities and interests.

As part of the Newquay St Piran's Festrival a number of events will be taking place at the Griffin in on Saturday 7th March.

We are are the first time arranging for a number of stalls to be available for visitors to browse.

There is the Newquay Farmers Market, which will take place outside and also in the downstairs function room.

Upstairs just off the bar will be the 'Fer Ertach Kernow' [Cornwall Heritage Fair] A number of local and wider Cornish groups are sharing their knowledge and letting people know what they do to help Cornish historic, cultural and environmental heritage. We hope to grow this group event in future years 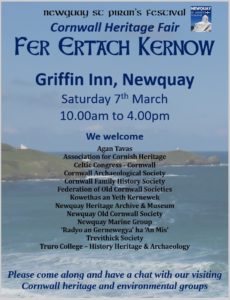 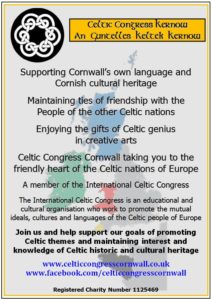 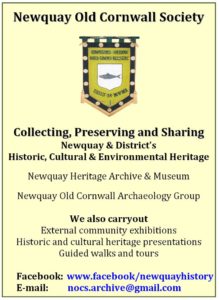 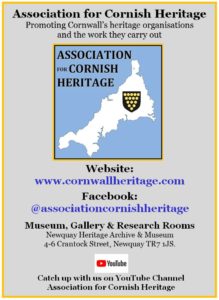